“ Continuing with the weeks focus on Chapels… from a Master of Color… the Light of Faith. A visit to Vence and the Henri Matisse Chapel. In this video we learn about Matisse and the Chapel project. 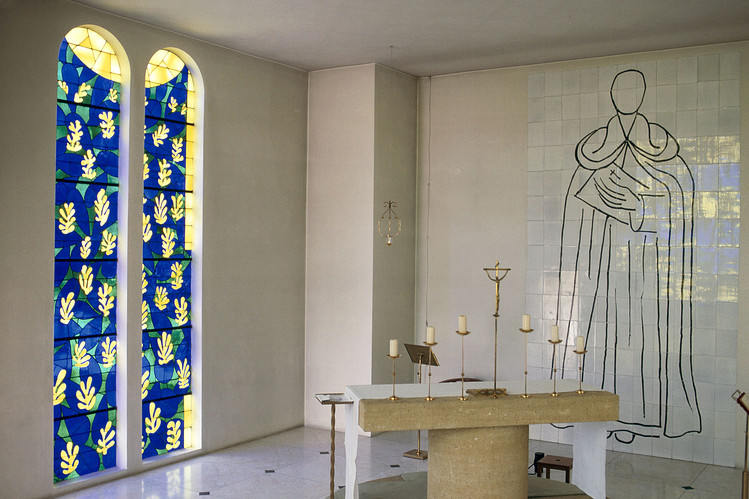 The chapel is arguably the greatest religious art and architecture project of the 20th century.

Jesus’ Parable of the Mustard Seed, with its imagery of a seed growing into a plant big enough for birds to perch in, is often seen as foretelling the growth of Christianity. Arguably the greatest religious art and architecture project of the 20th century, Henri Matisse’s Chapel of the Rosary, provides another reading.

While recovering his health in 1943, Matisse had hired a young nurse who four years later became a novitiate in the Dominican Sisters of Monteil.

Once, Sister Jacque-Marie mentioned to Matisse her order’s dream of a new chapel. Four years later, the Chapelle du Rosaire des Dominicaines de Vence, perched above the French Mediterranean coast, was consecrated by the local bishop. In a statement read at the occasion, Matisse wrote, “I consider it my masterpiece.”

Planned principally for the sisters’ daily prayers, the chapel is modest. Yet it is replete with Matisse’s glorious creations, from the images on walls and the vestments worn by the clergy, to the altar and its liturgical objects. 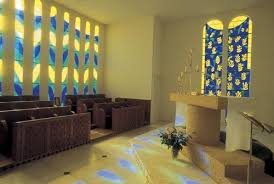 Matisse’s stained-glass windows are the center and glory of the chapel.

There are two tall windows behind the altar, and another set of 15 windows divided into two groupings—six along the nave; nine placed behind the sisters’ stalls in an area adjacent to the sanctuary.

For an artist long held as a master of color, the windows’ palette of only three hues—yellow, green and blue—may seem restrictive; but Matisse planned on the complementaries of red, orange and purple being cast by the filtered light’s shadows, even testing this effect in his studio.

Matisse’s colors provide a corresponding Christian iconography, with yellow a symbol of the sun and heavenly light; green of plant life and the earth; and blue of the sky, the sea and the Madonna.

The sanctuary is commanded by a towering figure of St. Dominic, the patron saint of the sisters’ order, who was said to have been given a rosary by the Madonna, thus making those prayers the center of Dominican practices. Matisse’s model was Father Couturier wearing his cowl.

The walls’ somber notes are provided by the Stations of the Cross, which Matisse placed directly opposite the altar’s Tree of Life window, perhaps acknowledging medieval texts that held that the wood of Christ’s Cross had come from the Tree of Life in Paradise.

For this Passion series, Matisse turned to Old Master paintings; for example, the Station I image of Christ before Pilate borrows from a work by the Renaissance artist Andrea Mantegna.

Matisse participated in virtually every detail of the project, creating the interconnection of elements sometimes called a church’s Holy Fabric.

His work included both the altar’s simple shapes made of a brownish, porous stone—to suggest the bread of the Eucharist—and the liturgical objects upon it: a crucifix and six candlesticks, and the tabernacle and the ciborium used to hold communion bread. Matisse also designed the vestments, planning each of the half-dozen different chasubles in one of the six church-appointed ecclesiastical colors for Seasons and Holy Days.

Before and after its June 25, 1951, consecration, Matisse’s chapel was sometimes disparaged. But praise won out. Pope Pius XII requested a set of the chasubles for the Vatican, and soon so many visitors began coming as to require restricted open hours to preserve the chapel’s—and Matisse’s—intended purpose of serving the sisters. Amusing—and telling—was the story of an English tourist asking directions to “the chapel of St. Matisse.”

As for the artist, Matisse said that “I wanted to create a spiritual space.” He did.

How I Paint without making a mess

Inside the Artist’s Studio – Jeremy Sutton