PAINTINGS – Every Day is a Good Day

Plenty of artists do pretty much the same thing most days.

Normally that’s just the making of art – The German Peter Dreher (born 1932) is different, even though he’s been painting the same empty glass tumbler in the same conditions on a near-daily basis since 1974.

There are 5,000 so far, and a sample of 144 (along with other work) can be seen at the Milton Keynes Gallery to 24 November.
MK Gallery is one of the UK’s leading public galleries.

The subject is just the impulse for the activity, which Dreher considers to be exercises in abstract mark-making, albeit they always turn out to depict his glass.

Hence the Zen title for the whole series ‘Every Day is a Good Day’, and hence Dreher’s statement that he ‘wouldn’t be all that upset if they were to disappear.’ Turns out he isn’t obsessive at all.

PETER DREHER – WHY The Same Glass Every Day?

Why would an artist paint the same object for more than 30 years?

His series challenges us to think about the differences between receptive and productive processing in how we perceive the world around us. To explain his work, Dreher adopted the term, “phenomenological reduction” from Edmund Husserl’s philosophy on a special form of knowledge.

He believes that our perception of the world is pre-structured with knowledge that we already have. Therefore we do not necessarily see objectively.

Instead what we see is embedded with our own experiences, interests, expectations, and values. The glass is always in the same place in his studio and it is always painted life-sized and when viewers look at the series, their initial response is likely to be that they are all the same.

While they may be correct that the paintings are of the same subject, each painting reveals something different about the glass.

Some glasses are light and clear and some are dark and heavy.

Some of the glasses show clear reflections of windows or other things and some reflections are blurry.

Dreher forces us to look at the work as objectively as possible and allow ourselves to process each painting as if it were a totally new visual experience.

The paintings are realistic in style but by putting them together into a series, the work becomes abstract and conceptual. 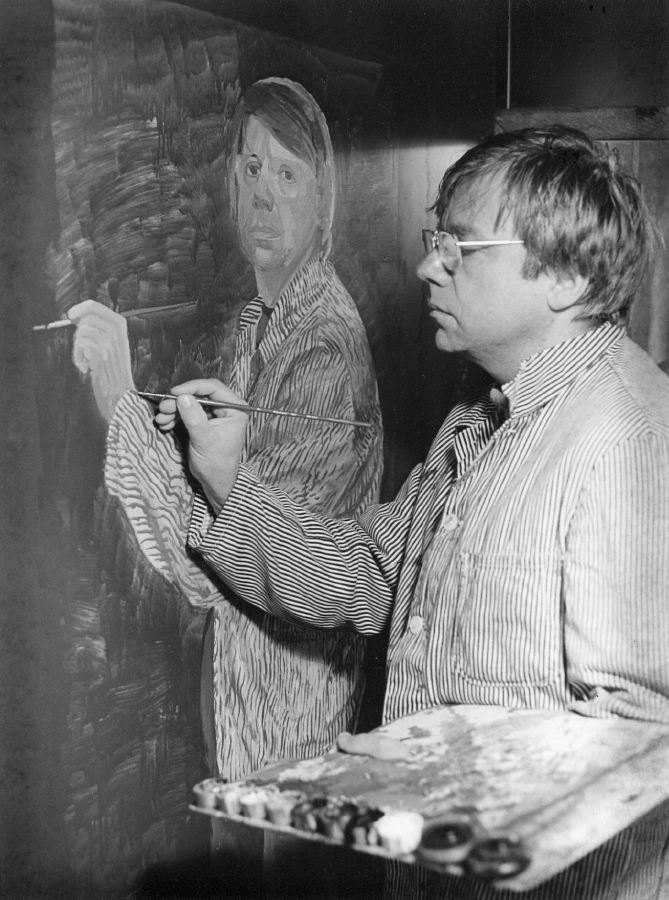 This conceptual approach to the glass series has influences from Chinese Chan (Zen) Buddhism, which emphasizes on being alert in the here as one experiences the present.

The title of this magnum opus, Day by Day is Good Day, is part of a quote shared by the influential ninth-century Chinese Zen master, Yunmen Wenyan. The quote can be found in the 6th Edition of the book, Bi-Yän-Lu (Blue Cliff Record), which is a collection of one hundred aphorisms that help people move towards a mystical experience of unity and “awakening” in life. The Zen Buddhists believe that every single piece and object of the world are of the same values and that we should be mindful of our surroundings and observe them without judgment and allow ourselves to perceive the world objectively.

The Pali canon states how Zen Buddhist monks should be mindful: “He watches untiringly with a clear mind, insightfully grounded in his body watching over the body, with his emotions watching over the emotions, with his awareness over his consciousness and with his mind over his mind. One could all this an all-encompassing and undivided attention for what is experienced in the moment, and an elaborate practice of self-reflection—an extraordinarily modern claim and approach which is taken up by present-day psychotherapy and then adapted to one’s own purposes.”

Peter Dreher embraces this philosophy and integrates it with Husserl’s philosophy to create this masterpiece. In this way, Dreher is often compared to the famous still life reduction artist, Giorgio Morandi, for they both have similar approaches to painting the same everyday objects by capturing the present moment of seeing the object.

Every single time Dreher paints the glass, he tries to perceive it without any preconception and paint what he sees objectively at that moment. Dreher states that painting the glass “is the only place and the only hours in my life when I really feel quiet. Maybe I don’t make the impression of being unquiet, but I am.”

I post to the blog 1-2 times a week, with interesting articles…All About Art. Museums, Galleries, Art Ideas, Artists to Know, and more.