Melissa Denes celebrates a dark, rich and emotionally exhausting show that was all the better for not showing Munch’s ubiquitous Scream

Melissa Denes guardian.co.uk
The Edvard Munch show at Tate Modern was a riot of colour, an exhilarating display of what paint can do; it was also profoundly moving and often dark. Munch’s sister died of tuberculosis when he was 14, and one large room was hung with his reworkings of that loss: his sister propped up in bed, their mother’s head bowed in grief, the two figures almost drowning amid heavy, green furnishings. Munch worked on variations of The Sick Child for more than 40 years; at the Tate, their cumulative effect was claustrophobic, a painful return to an open wound. 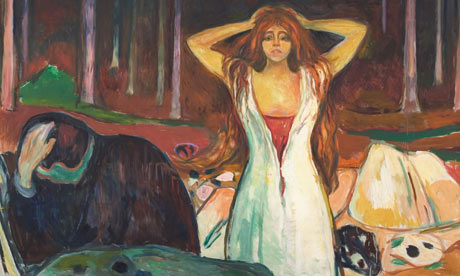 Munch also liked photography, and a good portion of this show dealt with his enthusiasm for the new medium. He liked to take self-portraits, holding the camera out at arm’s length – we got a lot of the artist’s heroic chin and profile, and some striking nudes (Munch again, sucking in his tummy). These were fun, and pointed to a possible sense of humour – but were nowhere as radical or compelling as the paintings. There were rare screenings of Peter Watkins’ three-hour 1974 biopic Edvard Munch (the DVD of the film became a gallery shop bestseller). 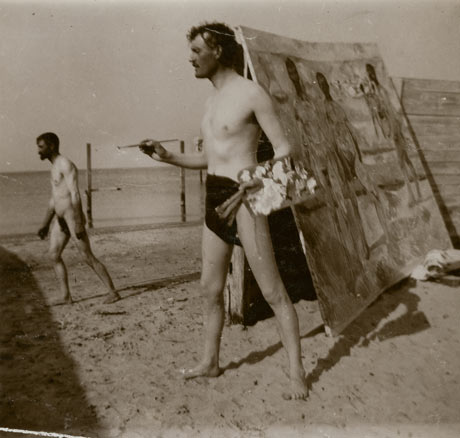 There was no Scream, and you didn’t miss it. The paintings were extraordinary: haunting, lurid, swooning, strange. In The Lonely Ones, a blonde woman in white looks out to sea as a man approaches (this was another image Munch visited and revisited). In Ashes, which could almost be a reverse view of the same scene, a woman in white appears to wade towards us out of the canvas; a man in black, head in hands, hunches in the corner. There were powerful pre-echoes of painter Peter Doig’s work: the same deep shadows, a similar palette (foregrounds flecked with mauve and white and lime green), people merging into water, woods or one another. Somehow The Scream would have seemed too obvious here – Munch’s weirdness made kitsch through over-familiarity. (It is now on show at MoMA in New York, where the city is plastered with posters advertising the arrival of a single work.)

If there is a certain vanity to his photographic self-portraits, Munch never spared himself when it came to painting. He showed himself drunk, sick, taking aim at a rival with a gun through a window. In his 60s, he suffered a haemorrhage in his right eye and embarked on a series of paintings about his damaged retina, or of what it looked like from the inside: abstract images, like solar flares; portraits of friends and lovers obscured by spots and phantoms. 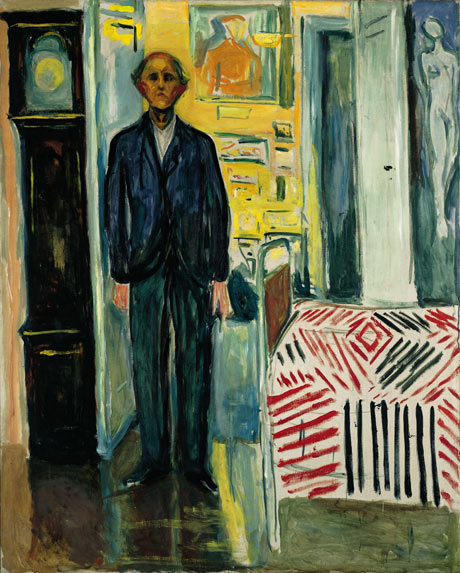 Munch’s eyesight improved, and he continued to work until his death at the age of 80. A final self-portrait showed the elderly artist standing between a grandfather clock and a bed, two harbingers of the end, his suit loose on his shrinking frame, his features barely there. The canvas is crammed with details – the paintings in the room behind him, the patterned bedspread – but as a portrait it is almost unbearably naked: the artist’s hands hang loose and unoccupied. He knows his number’s up. It was a fitting conclusion to a tremendous show, curated by Clément Chéroux and Angela Lampe of the Centre Pompidou in Paris: emotional, exhausting, generous. Next summer, Norway celebrates the 150th anniversary of Munch’s birth with twin exhibitions in Oslo; their challenge will be to top this.

Did you miss any of these? Catch up now…