” I love that the blog takes us to exhibits we just can’t visit. Here’s one that I wish I could see. Pioneer and photography artist all wrapped up in a female body. And she took it up later in life :-), at the age of 48. This is inspiration for all all those that believe it’s too late. It’s never too late! Enjoy.

Julia Margaret Cameron took up the camera rather late in her life, at 48, but very early in the life of photography. And, as much as anyone of her time, this 19th-century British woman (1815-1879) helped the nascent medium grow into a viable art form. 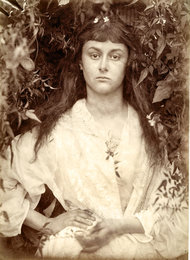 Julia Margaret Cameron “Pomona” (1872) is included in this photographic exhibition at the Metropolitan Museum of Art. 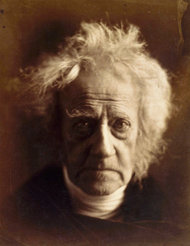 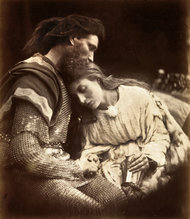 The Metropolitan Museum of Art •“The Parting of Lancelot and Guinevere,” a staged photograph by Julia Margaret Cameron.

Her luminous, feathery portraits and staged literary or biblical scenes are often grouped with Pre-Raphaelite paintings, which certainly influenced them; this was the case in two recentexhibitions in Washington.

The 38 photography works on display, all from the museum’s collection, show Cameron ascending almost instantly from accidental hobbyist to relentless and gifted professional. Her first camera was a Christmas present from her daughter and son-in-law, clearly intended as a kind of empty-nester’s diversion; they wrote, “It may amuse you, Mother, to try to photograph during your solitude at Freshwater,” referring to her Isle of Wight home.

But Cameron’s response to the camera was instinctive and passionate; she wrote, “From the first moment I handled my lens with a tender ardour, and it has become to me as a living thing.”

It helped, too, that her social circles in London and at Freshwater included many prominent writers and artists: Alfred, Lord Tennyson; Robert Browning; and Charles Dodgson (a k a Lewis Carroll), among others. (Alice Liddell, the inspiration for Carroll’s “Alice in Wonderland,” modeled for some of her pictures.)

Organized by the Met’s senior curator of photography, Malcolm Daniel, the show crackles with the vivacity of Cameron and her fellow aesthetes. Labels brim with amusing exchanges between photographer and subject, as when Tennyson nicknames an unflattering image of himself “The Dirty Monk,” or the philosopher Thomas Carlyle writes of his own portrait: “terrifically ugly and woebegone, but has something of my likeness.”

Official reviews were harsher; one, in The Photographic Journal, pilloried Cameron’s “out-of-focus portraits of celebrities” and went on to say, “In these pictures all that is good about photography has been neglected.”

The “neglect” was, in fact, a series of deliberate choices: moody lighting, shallow depth of field, long exposure times and a soft focus. To a contemporary eye, they are a virtue; they give Cameron’s portraits exceptional vulnerability, spirituality and candor, without quite undercutting their formality. Eminences like the astronomer and mathematician John Herschel become startling apparitions, with giant heads that seem to float in the frame. Particularly haunting is a photograph of the poet and translator Philip Stanhope Worsley, who suffered from tuberculosis; he’s mostly shadow, with a hint of beard and brow.

Some of these gently blurred pictures feel remarkably current, despite their antiquated stylings and hints of starchy Victorian moralism. The way Cameron approached her subjects was, in essence, the way we want to be photographed now: with intimacy and immediacy and a merciful, enchanting fog around our features, and by someone who treats the camera as “a living thing” rather than as an instrument of precision and perfection.

The same techniques, however, can make Cameron’s stagier shots — those rooted in literature, art history and biblical narrative — a bit cloying. The models for these pictures were mostly young women, family members and servants, with a few significant exceptions. Cameron cast her white-bearded husband, Charles, a retired jurist 20 years her senior, as the wizard Merlin and a doddering King Lear.

Her oval-faced, dreamy-eyed niece May Prinsep posed as Beatrice Cenci, the tragic heroine of a painting by Guido Reni and later a play by Percy Bysshe Shelley. And Cameron’s aristocratic-looking housemaid, Mary Hillier, modeled in Florentine costume for a profile portrait styled after quattrocento painting.

The most compelling of these images transcend specific allusions. “Christabel,” for instance, is titled after Samuel Taylor Coleridge’s unfinished poem about an evil sorceress who ensnares a virtuous maiden. But its image of a young woman with cascading hair (Ms. Prinsep again) is wonderfully, ambiguously ethereal.

And in a pair of mesmerizing photographs, a sort of before and after, an angular model identified only as “Mrs. Keene” transforms herself from a buttoned-up, bashful embodiment of Victorian modesty to a wide-eyed woodland sprite with unruly curls that spill over her shoulders.

That second, more electric photograph is titled “The Mountain Nymph, Sweet Liberty,” after a figure in Milton’s lyric poem “L’Allegro”:

“Come, and trip it as you go

On the light fantastic toe

And in thy right hand lead with thee

Those ebullient lines read like a statement of purpose for Cameron, who encouraged photography to act like the young, restless medium it was.

This article has been revised to reflect the following correction:Correction: August 24, 2013An art review on Friday about the Julia Margaret Cameron photography exhibition at the Metropolitan Museum of Art referred incorrectly to guests she entertained at her Isle of Wight home, Freshwater. They did not include her great-nieces Virginia Woolf and Vanessa Bell because Cameron died in 1879 before either of them was born. (Bell was born a few months after Cameron’s death and Woolf was not born until 1882.) The review also misspelled the surname of a writer in Cameron’s social circle who was also known as Lewis Carroll. He was Charles Dodgson, not Dodson.