“I‘m taking this opportunity as your “Art Critic” to walk down memory lane of Movie Theaters.
Here’s a classic example and one of the finest of it’s day.
In Chicago, and my local theater. They don’t build them like this today. 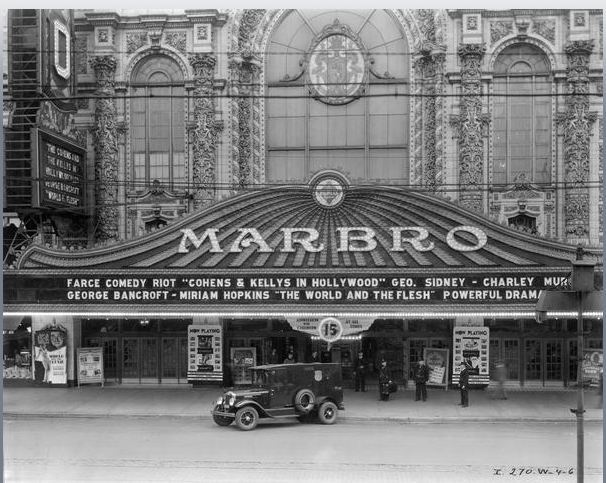 My first act of independence was to walk the 8 blocks to the Marbro Theater on Madison Street, in Chicago.

My favorite film was  ” A Date with Judy”

And my favorite actor of all-time...Robert Stack.
His poster picture hung in my bedroom until I was 17 years old. They called it a CRUSH.
He was my dream of the perfect man.

The Marbro Movie Theater was designed by Edward Eichenbaum for the firm of Levy & Klein, whose other notable Chicago theaters included the Granada Theatre and the Diversey Theater (better known by its later name, the Century Theatre), for the Marks Brothers chain (hence the theater’s name).

The Marbro Theater opened in 1927 on Madison Street and Karlov Avenue, not far from the spectacular Paradise Theater, which would open a year later. The almost-4,000 seat Marbro Theater was at the time one of the biggest theaters in Chicago, and not only drew its audience from Garfield Park, but the whole West Side of the city, as well as the bordering suburbs, all but stifling the competition.

The trade paper, Variety, wrote at the time that “…its beauty is loud, but beauty nonetheless”.

Opening day featured a parade with Garfield Park’s most prominent businessmen, the Gloria Swanson film, “The Loves of Sunya”, and performances by bandleader Benny Meroff and organist Albert Brown. Though critics warned the Marks Brothers that they’d have trouble filling the 4,000 seat theater, they were silenced when the Marbro Theatre began to draw patrons away from the nearby and longer established 3,000 seat Senate Theatre and smaller theaters in the area.

The opening of the Paradise Theatre around the block renewed speculation that the Marbro Theatre would falter, but the Marbro Theatre didn’t miss a beat, and in fact, once sound films became standard by the late-1920’s, it became the favored of the two, since the Paradise Theatre was notorious for its horrible accoustics almost from the day it opened (a tragic flaw that ultimately doomed the palatial theater).

On November 1, 1929, Marks Brothers sold the Marbro Theatre to Balaban & Katz (along with the Granada Theatre in Rogers Park that same day). The theater continued the format of live stage shows and films through the 1940’s.

The Marbo’s huge size worked against it eventually, and by the 1950’s, with the popularity of television, Balaban & Katz struggled to keep it even partly filled, and in 1963, it was closed.

Sadly, this magnificent giant was razed in 1964.

I post to the blog 3 times a week, with interesting articles…All About Art.
Museums, Galleries, Art Ideas, Artists to Know, and more.
Get all of the week’s articles in one email review.